World Day Against Child Labour 2021: What is it? Why is it observed?

Table Of Content hide
1 World Day Against Child Labour 2021: What is it? Why is it observed?
1.1 Why is it important?

Child labour is a social evil, it known to all of us but Child labour exists across the globe and children, mostly from poor families, are forced to work in hazardous conditions which leads to unending physical, mental and social exploitation and suffering from the employers.

According to the latest report by the ILO and Unicef, child labour has soared to 160 million worldwide, the first increase in 20 years. Child labour exists across the globe and children, mostly from poor families, are forced to work in hazardous conditions which leads to unending physical, mental and social exploitation and suffering from the employers. Children are deprived of living their childhood to their fullest and also miss the opportunity of attending schools. Why is it important?

Children are the backbone of any nation. The more educated and informed they are, the faster & stronger a nation would be. However, when they are forced into labour, their mental and physical growth is interrupted.The child is unable to go to school and is deprived of his/her right to education. This is only one of the many fundamental rights that get violated when a child is forced to work. 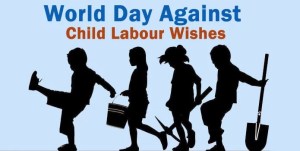 The International Labour Organization (ILO) launched the World Day Against Child Labour in 2002 to focus attention on the global extent of child labour and the action and efforts needed to eliminate it. Each year on 12th June, the World Day brings together governments, employers and workers organizations, civil society, as well as millions of people from around the world to highlight the plight of child labourers and what can be done to help them.