It is our dream to make settlements on Mars and start living on mars one day. Mars comes under habitable zone of earth . Therefore we dream to live on mars when earth gets distroy.

Table Of Content hide
1 What is astocret?
1.1 Mars and Moon biocomposites. (University of Manchester)

But one notable thing is that can you imagine how will we built houses on mars, shall we have to carry concrete in rockets to Mars for settlement purpose??  No it is not much affordable way to built houses. The scientists of Manchester University developed a great technology to make concrete from sweats,tears and blood of Astraunots.This concrete named as astocret. As it is made up of astronauts waste.  The biochemical will be used to build houses on moon and Mars. 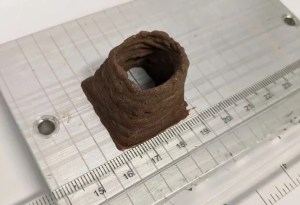 Over a two-year span, six humans could donate enough albumin to build 500 kilograms of AstroCrete. The contribution of each crew member would provide enough building material to expand the habitat to accommodate that person, the researchers’ calculations found.

But a great deal of further research is required. We don’t know the long-term health effects of continuous plasma donation in a low-gravity, high-radiation environment. We also don’t know how much plasma can be taken from a single person sustainably, and how that might affect fatigue levels.

However, it might only be a short-term solution. Once the base is established, there may be no more need for donations.

“We believe that human serum albumin extraterrestrial regolith biocomposites could potentially have a significant role in a nascent Martian colony,” the researchers wrote, “but will eventually be superseded by versatile bioreactors or other technologies as they mature.”

These biocomposite materials are even stronger than regular concrete, and would be suitable for making buildings on other worlds – if you could get astronauts to volunteer to be blood bags, that is.

Nevertheless, it demonstrates that building materials can be found in the last places you might think to look, if you can think creatively.

It’s not a new idea – animal blood was used to bind mortar in the Middle Ages – but it’s not a solution one might expect to find in the Space Age. New or not, it could help solve a huge problem with establishing off-world colonies – the huge cost.

“Scientists have been trying to develop viable technologies to produce concrete-like materials on the surface of Mars, but we never stopped to think that the answer might be inside us all along,” said materials engineer Aled Roberts of the University of Manchester in the UK.

When we do finally establish human settlements off-Earth, we’re going to have to be a bit creative. Every ounce on a rocket payload counts.

According to the latest data, it costs at least US$1,500 for each kilogram included in a rocket launch, never mind actually getting it there. A 2017 report found that it could cost as much as US$2 million to ship a single brick to Mars.

So as you see how expensive the transportation of concret is! In this manner the astocret will be helpful.