Shreya has her own day

Table Of Content hide
1 Shreya has her own day
1.1 Background of Shreya Ghoshal

Singer Shreya Ghoshal is India’s one of the most popular playback singers, who have established her name in the world’s map. The 35 year old singer started learning music at the age of four and went on to win Sa Re Ga Ma Pa, India’s popular singing reality show when she was only 16 years old. It was during this time when Bollywood Producer Sanjay Leela Bhansali noticed her and gave her the opportunity to sing as a playback singer in his movie, Devdas. The singer also won the hearts of people across the borders. In 2010, she was honoured by the United States state of Ohio, where Governor Ted Strickland proclaimed 26 June as ‘Shreya Ghoshal Day’. 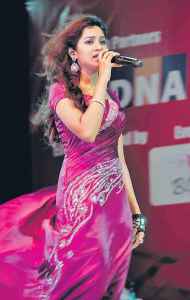 Shreya who can sing in more than 18 languages, has given her melodious voice to many movies. Apart from movies, the singer has lent her vocals for Television shows, TV network’s anthems, Award shows’ theme cover among others.

On 26 June 2019, we are celebrating Shreya Ghoshal Day by compiling a list of title tracks sung by the singer for Television shows. She is a Bengali girl situated from Kolkata.  Her home town is Berhampur in Kolkata. She is started her career with a song in Devdas movie which was given by Sanjay Leela Bhansali . She Started singing at the age of four with her father. At the age of 16 shreya  won Sa re ga ma pa reality show and comes on the first position. Here director Sanjay Leela Bhansali noticed her and decided to give her a chance in movie devdas. With her melodious and sweet voice she won the hearts of people all over India, not only India but also beyond borders she won the hearts of millions of people.

She has honoured by shreya Ghoshal Day on 26th June by American states Ohio. I want to inform you that before shreya Ghoshal Rabindranath Tagore and swami vivekanand also got their day.