The story of St. Nicholas, the bishop of Myra in Minor Asia, who died on December 6th, 343, dates back to the 4th century. He is said to appear in the company of Knecht Ruprecht, “Knecht” meaning “servant”. Historically, Ruprecht was a dark and sinister figure wearing a tattered robe with a big sack on his back in which, as a legend says, he would put all naughty children. St. Nicholas also appears together with St. Peter, with an angel, the Christchild (Christkindl). As the gift-giving function of St. Nikolaus began to shift to the splendor of the candle-lit Christmas tree and emphasis on the birth of Christ, Knecht Ruprecht became the servant and companion of the Christchild. In this role Ruprecht became the patron saint of Christmas and was called “Weihnachtsmann,” Father Christmas or Santa Claus. 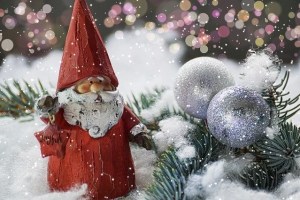 St. Nicholas Day, or Eve, is celebrated on December 6. This is the favorite holiday of all children – it’s a gift-giving day. When evening comes, St. Nicholas, a reverend gray-haired figure with flowing beard, wearing gorgeous bishop’s garments, gold embroidered cope, mitre and pastoral staff, knocks on doors and inquires about the behavior of the children. The custom of examining the children, where they will cite a verse, sing, or otherwise show their skills, is still widespread in German-speaking countries. Each little one gets a gift for his performance.

The most famous story about St. Nicholas tells how the custom of hanging up stockings to put presents in first started! It goes like this:

There was a poor man who had three daughters. The man was so poor that he did not have enough money for a dowry, so his daughters couldn’t get married. (A dowry is a sum of money paid to the bridegroom by the bride’s parents on the wedding day. This still happens in some countries, even today.) One night, Nicholas secretly dropped a bag of gold down the chimney and into the house (this meant that the oldest daughter was then able to be married). The bag fell into a stocking that had been hung by the fire to dry! This was repeated later with the second daughter. Finally, determined to discover the person who had given him the money, the father secretly hid by the fire every evening until he caught Nicholas dropping in a bag of gold. Nicholas begged the man to not tell anyone what he had done, because he did not want to bring attention to himself. But soon the news got out and when anyone received a secret gift, it was thought that maybe it was from Nicholas.

Because of his kindness Nicholas was made a Saint. St. Nicholas is not only the saint of children but also of sailors! One story tells of him helping some sailors that were caught in a bad storm off the coast of Turkey. The storm was raging around them and all the men were terrified that their ship would sink beneath the giant waves. They prayed to St. Nicholas to help them. Suddenly, he was standing on the deck before them. He ordered the sea to be calm, the storm died away, and they were able to sail their ship safely to port.

St. Nicholas was exiled from Myra and later put in prison during the persecution of Christians by the Emperor Diocletian but he was released in the time of the later Emperor Constantine, who was a Christian. St Nicholas attended the Council of Nicaea in 325 (where things about Christianity were discussed).

No one is really knows when St Nicholas died, it was on 6th December in either 343 (which seems to be the most probable), 345 or 352. In 1087, his bones were stolen from Turkey by some Italian merchant sailors. The bones are now kept in the Church named after him in the Italian port of Bari. On St. Nicholas feast day (6th December), the sailors of Bari still carry his statue from the Cathedral out to sea, so that he can bless the waters and so give them safe voyages throughout the year.

in 1066, before he set sail to England, William the Conqueror prayed to St. Nicholas asking that his conquest would go well.